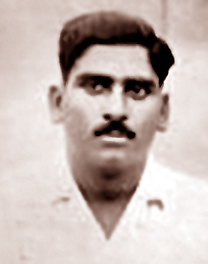 Alluri Sitarama Raju born on July 4, 1897 in Visakhapatnam District was also called ‘Manyam Veerudu’ meaning Hero of the Jungles. He was keen to know more about India’s political condition but had lesser interest in studies.

He was a revolutionary actively involved in the independence movement in India. During the period 1922-1924 he led the Rampa Rebellion against the British for preventing tribal people in the forests from engaging in the shifting cultivation called the podu agricultural system which was followed traditionally. He raided a number of police stations in and around Annavaram, Chintapalle, Dammanapalli, Narsipatnam, Krishna Devi Pata and many others, to steal ammunition and guns to kill officers of the British army.

Eventually the British trapped Alluri Sitarama Raju from the Chintapalli forests, tied him to a tree in Kayyuru Village and executed him by gunfire. The Indian Postal Department, in 1986 issued a commemorative stamp in his name. As a great freedom fighter who worked for the welfare of tribals, the Government of India installed his statue at the precincts of the Indian Parliament. He was indeed a brave son of India who laid down his life for India and tried to free it from British oppression.

The Gaza Strip Politics The Gaza Strip is located on the Mediterranean Sea’s eastern coast. It is an entity that is self governing and borders Israel on the north and east and Egypt on the south-western side. The Hamas have governed the Gaza Strip from the year 2007, de-facto. Hamas

Batukeshwar Dutt (November 18, 1910 – July 20, 1965) also known as B.K.Dutt, Mohan and Battu, was born in Oari, Purba Bardhaman West Bengal. He was part for the Hindustan Socialist Republican Association and Naujawan Bharat Sabha. He is well known in the Indian freedom struggle as a fighter and

Events that led to the collapse of USSR’s hold on Eastern Europe in the late 20th century. The 20th century saw the rise and subsequent disintegration of a number of world economies, the most important being the dissolution of The Union of Soviet Socialist Republics-the USSR.  This officially took place