Analysis of ‘A River Runs Through It’, by Norman Maclean 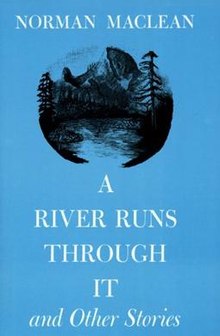 Analysis of 'A River Runs Through It', by Norman Maclean

Norman Maclean was born in Iowa but moved to Missoula, Montana. He worked as a fire fighter, fisherman, logger and later as a teacher of English. He came to writing rather late in life but his only book which is a novella called, A River Runs Through It, has been credited as one of the classics of American literature. This book is a favorite with fishermen who consider it a seminal work on fly fishing.

The main theme of A River Runs Through It is the unity between man and his environment. The Protestant Christian upbringing presents no conflict between man and nature. Man does not attempt to dominate nature nor does nature present an image “red in tooth and claw”. There is perfect harmony and the author is able to forget the tumult in his life when he is immersed in fishing.

The troubled relationship between Paul and Norman forms the core of the book. Paul is a difficult character. He believes in seeking excitement rather than permanence in relationships. The contrast that lies between Paul and Norman’s characters is that while Paul is forceful he is not well integrated. Norman is firm and stable inside and he is able to outlast troubled times. Paul’s indulgence in alcohol proves to be his undoing. As with his family, Paul’s interactions with acquaintances are volatile. This volatility leads to his death.

Though there is much in common between the brothers, the contrast between them is too stark to be ignored. Norman had deep regard for the land he inhabited and the resources it produced. He was also a lot more stable and collected than his younger brother Jim. Norman was aware than his brother lived a life that was on the wild side, he felt that talking to him about it was intrusive. When Paul is killed in a brawl, he feels he has failed his brother.

Norman Maclean compresses the events that span several summers into one. The Maclean family was deeply spiritual; they also lived in close communion with nature. Fly fishing was an activity they pursued like religion. This activity served to help the male members of the family bond with each other. They respected nature which showed its benign face. Norman is already middle aged when the story opens. His brother Paul is in his thirties but his body is shaped and contoured by years of fly fishing at which he was an expert.

The story is based on the events that mark the history of the Maclean family. The author does not fictionalize the story but refers to the characters as “my father”, “my brother” etc.

1.   “Eventually, all things merge into one, and a river runs through it. The river was cut by the world's great flood and runs over rocks from the basement of time. On some of the rocks are timeless raindrops. Under the rocks are the words, and some of the words are theirs.
I am haunted by waters.”

The novel has the river as an important character. The lives of all the characters are touched by the river in some way or the other. The river has been there from the beginning of time; it shapes the land over which it flows. The author cannot ignore the power of water; he seems to be haunted by it.

2. “Each one of us here today will at one time in our lives look upon a loved one who is in need and ask the same question: We are willing to help, Lord, but what, if anything, is needed? For it is true we can seldom help those closest to us. Either we don't know what part of ourselves to give or, more often than not, the part we have to give is not wanted. And so it is those we live with and should know who elude us. But we can still love them - we can love completely without complete understanding.”

Norman Maclean knew that his brother Paul needed help but he was not sure how to help him. He was not sure whether Paul would accept his help. Paul was an alcoholic; he was violent and had destructive relationships with women. Despite being aware of Paul’s failings, Norman was not able to reach out to his brother.

3.   “When I was young, a teacher had forbidden me to say "more perfect" because she said if a thing is perfect it can't be more so. But by now I had seen enough of life to have regained my confidence in it.”

As Norman grows older, he realises that there are degrees of perfection. His teacher had taught him to eschew the phrase “more perfect” as something that is perfect is at its zenith and cannot be improved upon.

4. “To him, all good things - trout as well as eternal salvation - came by grace; and grace comes by art; and art does not come easy”

Norman’s father was a devout Christian. He believed that attaining grace was not by any means easy. One had to strive hard to achieve grace. It was a difficult art.

The Broken Heart The Broken Heart by John Donne is about love and the pains when love is rejected. John Donne a poet of repute and cleric in Church of England had written many forms of poetry. Donne’s style is to open the poem with lines that is abrupt with