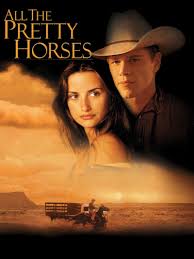 Cormac McCarthy is an American writer who was born in Rhode Island. He attended the University of Tennessee but did not graduate. His writing is marked by the sparse use of punctuations. McCarthy has won several awards. All the Pretty Horses is one of the Border Trilogy which features the border towns of Mexico. McCarthy is fluent in Spanish; Spanish conversation can be seen often in the Trilogy.

Horses form the core of the novel. The novel is all about riding them, training them, admiring them and breeding them. Horses are an important character in the novel. The boys consider the horses not just as a means of transportation but as friends. For his horse, Blevins is ready to die. The horses connect the characters. Horses figure prominently in the lives of all the characters, not just the major ones. Take away the horses and the parts will not form a whole.

Among the many themes that link up the different parts of the novel, the loss of innocence and loss of the past are entrenched in the story. John Grady is at crossroads when he sets off with Rawlins. All his life he has lacked true support and guidance; his grandfather was his link to a past way of life that he longs for. But his mother now plans to cut his bond with land. With no clear goal, Grady rides off into the open hoping to find what he vaguely seeks. Coming of age novels are a genre of their own: the hero or heroine rebel against their situation, find love that leads to loss of innocence. The love may be consummated or defeated by stronger forces.  Though he begins by being a confused adolescent, by the time the story ends, Grady has grown to be a man. When he leaves looking for a new life at the end of the story, he is a hardened man who can face life and its slings and arrows.

Family relationships are another theme that runs through the novel. John Grady comes from a dysfunctional family. His mother takes off for the city leaving him in the care of an old Mexican woman while he is still a baby. His father is a World War II veteran who is away for long periods. All that his grandfather taught him was about horses. Rawlins comes from a family that knows only deprivation; Blevins has no one to call his own. At 13, he is more mature than many adults.  At La Purisima, the Rochas live in the lap of luxury but that does not make Alejandra contented. She is alienated from her family drives her deeper into John’s arms. To her, John is a hero capable of mythical acts.

The Interaction between Nature and Humans

McCarthy uses the motif of horses to make his statement about nature: human life is transitory but nature is everlasting. Man’s achievement, great though it may be, cannot match what nature can do. Those who accept the cycles of nature are better equipped to deal with loss and change. Man struggles for successes and wealth not knowing that these are not permanent. Grady cannot find fulfillment in a ranch or a hacienda, but on horseback, his link with nature is complete.

He is the protagonist of the novel. Though only sixteen, he knows what he wants: a life lived among horses. He is unusually skilled with horses. They do his bidding; he speaks their language and knows their mind. At home, he finds no one who can be the support a child needs. He mother lives in the city pursuing her career, his father is a soldier who is away from home and his grandfather is good only when it comes to horses. Hi lives his life according to a strict cowboy code that includes valuing honor, taking responsibility, seeking justice and respecting nature.

Rawlins runs away from his poverty stricken family; his best friend is the sixteen year old Grady who is more mature than him. Unlike Grady, Rawlins is uneasy of running away from home. Rawlins functions at a different level from Grady. He is less intelligent and less introspective. Rawlins looks up to Grady for reassurance and guidance. Rawlins lacks Grady’s determination to pursue his dreams to their end and he chooses to stay back with his family at the end.

The novel opens with the death of John Grady’s grandfather. With his death John loses not only his grandfather but a way of life and the ranch in which he grew up, for his mother plans to sell it. John does not wish to live in a city; he wants to be a cowboy capturing wild horses and taming them. Lacey Rawlins is a friend who wants to run away from home for different reasons. He has had enough of the grinding poverty at home. Their destination is Mexico where they hope to live a cowboy’s life adhering to the strict moral codes that govern it. On their way to Mexico they are joined by the thirteen year old Blevins who seems almost adult like in behavior.

Disaster hits them as they enter Mexico. They ride into a terrible storm which forces them to hurriedly seek shelter. Blevins who is terrified of lightning abandons his prized horse and jumps into a ditch to hide. In the morning, he finds that his clothes are in tatters and his horse and guns have been stolen. Looking out for the horse, they wander into a village where they spot the horse but it has been claimed by someone else. At night they attempt to steal the horse but things go wrong and Blevins is separated from Rawlins and Grady. As a posse pursues them, they ride further south till they reach the ranch owned by Don Hector.

Here Grady impresses everyone by his skill with horses. But to complicate matters he falls in love with Alejandra who is Don Hector’s daughter. Her aunt Alfonsa who notices this warns them off nevertheless, they embark on a clandestine affair. It is not long before Don Hector comes to know of it. He turns Grady and Rawlins over to the police on some trumped up charges. Meanwhile they hear that Blevins is in the village looking for his horse. He has fought with some people and killed one of them. Blevins is arrested and Grady and Rawlins charges as his accomplices. Rawlins who is tortured confesses to crimes they have not committed. Blevins is later executed. Rawlins and Grady are held in a notorious prison from where they are suddenly released due to Alfonsa’a influence. In return, she wants him to break off relationship with Alejandra. In spite of her dictates, they get together briefly but part as Alejandra decides that she cannot do without her family. Grady is devastated but decides to stay on in Mexico till he can recover his horses. For this he takes a Captain hostage. He gets his horses but is ambushed and severely wounded. To evade capture, he crosses into Texas. When he goes back home, he finds that it has been sold and his father is dead. The ranch was rightfully his but his mother has sold it. Rawlins decides to stay back but Grady rides away into the sunset.

Blood is a dominant metaphor in the novel. Descriptions involving the color red take on the form of religious imagery. Much blood is shed by Grady; this blood seems to transform him spiritually. It connects man with his history, the landscape that gives him his identity and his destiny. The use of terms like “Judas-hole” which refers to the peep-hole in the cell in which Grady and Rawlins are incarcerated takes the religious imagery forwarded. The Judas here is Blevins who under torture had revealed the identity of Grady and Rawlins. If Blevins is Judas, Grady is the Jesus figure.

This passage tells us a lot about the life the grandfather and his brothers lived. They sought out danger and adventure meeting their in their pursuit. They seemed to have cared less for their safety and more for adventure. In fact, it would appear that they were reluctant to die a peaceful death.

John Grady and his mother could not see eye to eye on the subject of the ranch. For John Grady, living in a ranch in Texas was as close to heaven as possible. But his mother did not think so. If the ranch was making money, there would have been some justification but that is not the case here.