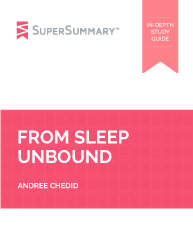 Analysis of ‘From Sleep Unbound’ by Andrèe Chedid

Analysis of ‘From Sleep Unbound’ by Andrèe Chedid – From Sleep Unbound is a French novel written by AndrèeChedid which was published in 1952. It was translated into English; tells the story about a loveless marriage of young Egyptian woman. AndrèeChedid is a dramatist, novelist, poet and essayist of Lebanese origin. She was born in Cairo and educated there but moved to Paris in 1946. AndrèeChedid lived most of her life in Paris and became a naturalized citizen of France.

She is the recipient of many awards. Some of them are Prix Louise Labbe in 1969 and Prix Mallarmein 1976 for poetry, Aigled’or de la poesie (1972) and Grand Prix de L’AcasenieBelge (1974). Most of her works talk about an individual and the connection between the individual and his or her world.

Summary – Analysis of ‘From Sleep Unbound’ by Andrèe Chedid

Samya is the individual around whom the story From Sleep Unbound revolves. Samya is a young girl, fifteen years old, and is only considered as an object by her father. She is married offto  Boutros who is rich. This marriage helps Samya’s father to solve his financial troubles. Marrying off daughters at young age for financial or social benefits was normal in the Egyptian culture.

So here was Samya married off much against her wishes to a rich cruel overlord who is forty five years old. She is married off without much dowry. When she reaches the new home many women come with gifts and are nice to her but her fate was sealed. Boutros considers Samya as his property and she cannot do anything without the permission of her husband.

Analysis of ‘From Sleep Unbound’ by Andrèe Chedid

To add to her misery she does not become pregnant and she is ridiculed by her husband. During fights he slaps her. Samya writes to her father about his treatment but father being a man himself thinks it’s fine for a man to treat his wife like that. Finally after seven years she becomes pregnant after a visit to Sheika the village fortune teller. Sheika is the man women went for fertility advice. Samya however did not listen to his advice, nevertheless she becomes pregnant. Soon after she delivers a daughter but she is not welcomed by Boutros. Samya is overjoyed and spends all her time taking care of her little girl.

Misfortunes strikes again in the form of death-death of her daughter. Samya is devastated, becomes immobile and slips into depression. Boutros’ sister nurses her back to wellness. Samya who comes back cured is not the old timid girl but one who defies Boutros. She blames him for all that happened in her life and one day she shoots Boutros knowing very well that she will be imprisoned. In her prime she lived in a big house like a prisoner, now she would live like prisoner in a jail. Physically it was not going to be very different but ideologically for Samya this act was one of freedom from oppressive rule of Boutros over her.

Characters – Analysis of ‘From Sleep Unbound’ by Andrèe Chedid

Samya is young girl when the story opens. She is a girl with a free spirit and has a will of her own. But she is caught in a marriage where her opinions and desires don’t matter. At first she had to listen to her father and then it was her husband. For seven years she lives a life of dread but after that her daughter is born and from then for six years she is happy. Even this happiness is short-lived. She goes through trauma but comes out of it for the better. Her second coming is dramatic because she is a changed person. She defies her husband and gets her revenge by taking the extreme step of killing him.

Boutros is a forty five year old man when the story opens. He marries Samya and like most rich men considers her as an object of enjoyment. He restricts her in all ways and kills the life and spirit in Samya. When she bears a child one would think he would change but no. He is unhappy it is a girl child and continues to be what he is. The result of all that he did was death in the hands of his wife Samya.

Rachida is Boutros’ sister and helps Samya after the death of her child. She is very conservative and does not attempt to break the rules. She is very devoted to her brother. Mia is Samya’s daughter who dies at the age of six but the one who gave Samya a purpose to live for six years. Sheikha is the fortune teller who had a knack of getting women to become pregnant. It was believed that he had the soul of a woman.

The themes that are seen in the story are oppression, isolation and abuse. Once Samya is married to Boutros she becomes his property as per the Egyptian culture. So properties are to be enjoyed and properties don’t ask questions or give opinions. This is exactly the situation Samya is in. She cannot choose her clothes, have money on her own or even defy her husband. She had to flatter Boutros all the time and be submissive to him. Most women accepted it meekly but Samya was young and spirited. So this was a heavy feeling of oppression. Wives were to bear any number of children as the husband desired. Samya did not become pregnant for seven years and she had to face more oppression because of that. Her marriage was akin to a life in prison.

With her marriage Samya had to stop schooling and moved to a home far away from her home. She knew no one there and was isolated. She could not contact her friends and family. Sometimes she went out with other women there but she never felt any intimacy with them. For most of the time she lives in complete isolation. Added to oppression and isolation Samya was also abused by Boutros. He verbally abused her and even slapped when they had fights. He insults with no concern for her emotions or health.

The story is set in a Lebanese town. The story starts in Samya’splace and when she is married off she moves to her husband’s town which is far away from her hometown. Once in a while she moves to some places in the town but for most of the time she is inside the house.

“Much of this delicately composed, elegant novel is a gentle and simple story of a woman searching for herself in a world of callous, unimaginative male supremacy…. The writing, disclosing bitter, painful truths, is deceptively lyrical.”The Times

“This is a lyrical novel that portrays the life of an Egyptian woman who is forced to accept a loveless and humiliating marriage.”The Women’s Review of Books