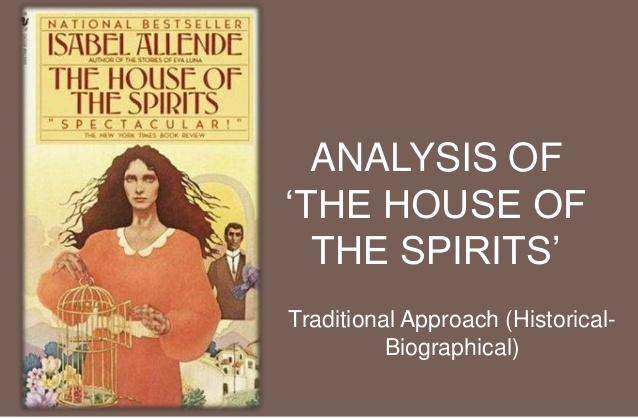 The House of Spirits

Analysis of ‘The House of Spirits’ by Isabel Allende – The House of the Spirits is the first novel of Isabel Allende. It was published in 1982 after being rejected by many Spanish publishers. It was declared the Best Novel of the year in Chile. This book catapulted Isabel Allende into fame. Isabel Allende is a Chilean writer. Her novels are mostly based on historical event s and personal experience.

She gives a lot of importance to women and there are elements of realism and myth in her stories. She has received Chile’s National Literature Prize in 2010 and in 2014 Barack Obama awarded her Presidential Medal of Freedom.

The House of Spirits was conceived when Allende received the news that her grandfather, who was hundred years old, was dying. She started to write a letter to him and that became the initial manuscript of The House of Spirit.

Summary – Analysis of ‘The House of Spirits’ by Isabel Allende

The story begins when Esteban and his granddaughter Alba go through the journals of Clara del Valle and they put it together to create the story of the family. Clara del Valle began to keep a journal as young girl when a priest accused her of being possessed. She is the young girl at the del Valle house and she had a sister Rosa who was very beautiful and engaged to Esteban Trubea. Clara was clairvoyant; she could predict events but could not stop it if it was dangerous. She predicts that an accident was going to happen and it does happen in the form of the death of her sister. Her sister, Rosa, was poisoned accidentally.

The poison was meant for her father who was a senator. When her prediction of the accident comes true through Rosa she stops talking about her clairvoyant experiences. Esteban is devastated but lady luck smiles on him in the form of fortune from his family property.

However he begins exploiting the workers in land and even rapes some of them.  His favourite was Pancha. He also had relationships with prostitutes as well and one of them was Transito Soto. They become good friends as well and he gives money to her to move to the city. Esteban’s mother is about to die and he pays a visit to her and he marries Clara. They move to house in the corner built by Esteban. His sister Ferula also moves in and Clara and Ferula become close.

Esteban is jealous of Clara and Ferula’s friendship and sends her away. Clara gives birth to Blanca and later to twins Jaime and Nicolas. Blanca as a little girl falls in love with Pedro Tercero who is the son of a peasant foreman in Tres Marias and he was a revolutionary. Esteban was a conservative and did not approve the love affair.

Esteban makes Blanca leave Tres Marias and decides to kill Pedro. This anger is reflected on Clara and hits her. With that she stops talking to him. Blanca continues her affair and is pregnant. Esteban tells Blanca that Pedro is killed and married her off to Jean de Satigny but she soon comes back as he has some strange sexual practises. Meanwhile Jaime and Nicolas finish their boarding school and are back home. Esteban runs for senate and wins and Clara returns to a civil relationship with Esteban.

Blanca gives birth to Alba and she is considered lucky and is loved by the entire family. She becomes very close to Esteban. Alba thinks Jean de Satigny is her father and is dead. She meets Pedro, with whom she is friendly. Clara dies. Alba enters college, falls in love with Miguel who is the friend of Nicolas. Miguel is also a revolutionary. The conservative now was losing ground and the socialists win the elections. Peasants take over Tres Marias and Esteban tries to stop them but in vain. Soon after, there is military coup.

In the coup Jaime is killed. Blanca and Pedro escape to Canada. Alba is kidnapped by the grandson of Pancha and Esteban. Transito pays back Esteban’s favour by finding Alba and returning her to Esteban. The story shifts to where it started and before the story is completed Esteban dies and Alba finishes the project. In detention by the socialists Alba is raped by men and she is pregnant. She does not know whether it is Miguel or the men who raped her who had impregnated her.

Characters – Analysis of ‘The House of Spirits’ by Isabel Allende

Clara is the main female protagonist in the novel and is the connection between Trueba and del Valle families. She is clairvoyant and held the family together. She is surrounded by animals and flowers. When she is hit by Esteban she goes silent for many years but does not walk out on Esteban. Esteban is the patriarch in the Trueba family. He believes in conservative politics and becomes a senator. He is a man who throws his power on the poor peasants.

Esteban loves Alba, allows Blanca and Pedro escape to Canada. As he ages he becomes a little considerate.  Alba is the last in the family mentioned in the story and she is the voice of the novel and narrates the story in the third person. Blanca defies her father all the time especially in her affair with Pedro. There are many other characters who bring in life to the story.

A theme that strikes first is the class struggle between the landed and the peasants. Initially the landlord Esteban makes use of the peasants for his personal satisfaction. After a few years tables turn and peasants take over the lands of the landed. The power of women is another theme in the novel. Most of the main characters are women and they are empowered. Ancestry is another theme that comes through in the novel.

The house of De Valle is the main estate where the story happens. There is a shift to the village when Esteban moves and then he gets the property Tres Maria. After marrying Clara they move to house in the corner. There is a change in the setting quite often and it has to be so as the story runs over three generation.

“But while novels of this length and variety often erode the reader’s patience, ”The House of the Spirits” has the effect of wearing down one’s resistance.”The New York Times, 1985.

“It is obvious that Isabel Allende’s novel about Chile, The House of the Spirits, has something about it that appeals to women readers: but I cannot imagine what that something is. ‘Magical realism’ is the vogue-word: but this seems to me a farrago of fantasy-triggers” – Dan Jones, writer and historian.