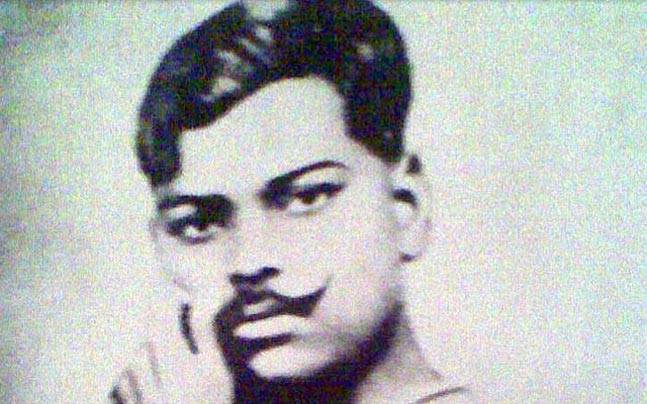 Chandra Shekhar Azad (July 23, 1906 – February 27, 1931) popularly known as Azad, ‘The Free’ was an Indian revolutionary, born in Bhavra village in Aliraipur District in Madhya Pradesh. As a

15 year old student he joined the Non-Cooperation Movement launched by Mohandas K. Gandhi and was arrested. He gave his name as Azad on being produced before the magistrate. After this day, people began to know his as Chandra Shekhar Azad. After the death of Ram Prasad Bismil, the founder of Hindustan Republican Association, he renamed the Association as Hindustan Socialist Republican Army. With the help of revolutionaries like Mahaveer Singh and Sheo Verma, he got the HRA reorganized later.

In an attempt to blow up the train of the Viceroy, he was involved in the Kakori Train Robbery in the year 1925. To avenge the killing of Lala Lajpat Rai, he was involved in the shooting of J.P.Saunders in 1928 at Lahore. Nehru, despite being a Congress member, gave money in support of Chandra Shekhar Azad. Azad shot himself dead with his Colt pistol when police surrounded him at a park. He held a pledge that he would never be caught alive. Several public institutions, schools, roads and colleges have been named after Azad.

How The Culture Set Up By Aryans Is Still Seen In India When the Aryan civilization came to an end, not much physical evidence was left behind by them. Archeological monuments and great buildings were not constructed by them. The ancient civilization of the Hindu-Aryans is based mainly on the

Aurangzeb Aurangzeb the third son of Princess Arjumand Bano Begam of Persia and Prince Khurram was born on November 4, 1618. His mother was better known as Mumtaz Mahal termed as the ‘Beloved Jewel Of The Palace’ which gave inspiration to Shah Jahan to construct the Taj Mahal later on.

Rwanda and Srebrenica: While examining the evolution of UN peacekeeping two cases stand out. Out of the more than fifty cases since 1945 these two cases calls for special attention and that is the genocide that happened in Rwanda in 1994 and the brutal killing of about eight thousand Bosnian