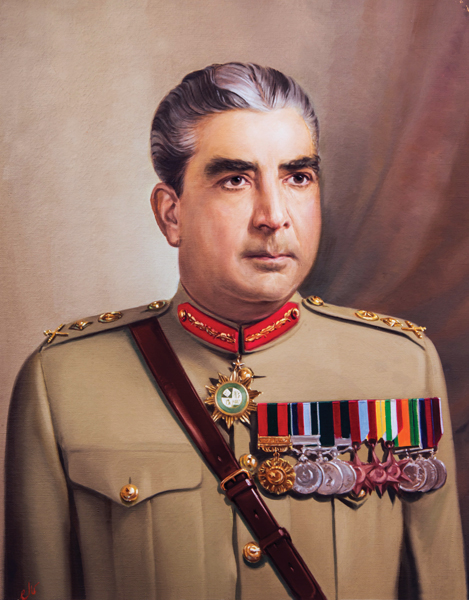 He was a professional soldier.

Yahya Khan was born on 4th February 1917, in Chakwal, Pakistan and died on 10th August 1980 in Rawalpindi, Pakistan.

During the World War II he served in the Middle East and Italy. At age 34 he became youngest brigadier general and at 40 became the youngest General in Pakistan. In 1966 he became Commander In Chief of the Armed Forces in Pakistan. When street riots erupted in Pakistan he was in command of the military. To preserve Pakistan’s integrity, he was called by Ayub to take over direction of the government. In 1969 when Ayub Khan resigned his office, Yahya Khan became President.

During the Second World War, Yahya Khan played an active role. Not only did he lead the war against Eastern Pakistan, but also was instituted martial law. Millions of people were left dead due to his policies.

He was put under house arrest by Zulfikar Ali Bhutto, foreign minister. Paralyzed by a stroke shortly afterward,s he couldn’t play any important political role further after his release.

Yahya Khan played a vital role in training and improving efficiency of troops on becoming an officer in the army. Before being promoted as Head and General of Instruction, he directed a modernization project of the army in Pakistan. Besides introducing many reforms in the army, he strengthened and improved the army structure, had the military command reorganized, procured new weapons and created three infantry divisions.

Yahya Khan imposed martial law in Pakistan, dissolved provincial and national assemblies and repealed the constitution. In the National Assembly he increased numbers of East Pakistani representatives. Conditions for future elections in the parliament were enumerated after he promulgated a provisional constitution on 29th March 1970.

Yahya Khan is survived by one daughter Yasmeen Khan and one son Ali Yahya.

Around 3 million people were killed in the genocide in East Pakistan before the humiliating defeat of Pakistan by India.

Causes Practices and effects of wars 4: Effects of War Effects of war are both long term and short term and they are wide spread. What happens to the soldiers and civilians are different, nevertheless both suffer in times of war. The wars of the twentieth century were lead by

A Brief                Russia suffered heavily during the First World War and placed an extreme stress on the weak government of Russia and its economy. This resulted in heavy scarcities and starvation. This mishandling and let-downs of the war turned people and its soldiers against the Tsar. The Tsar’s idea of