India: Achievements Of the Chandragupta Maurya 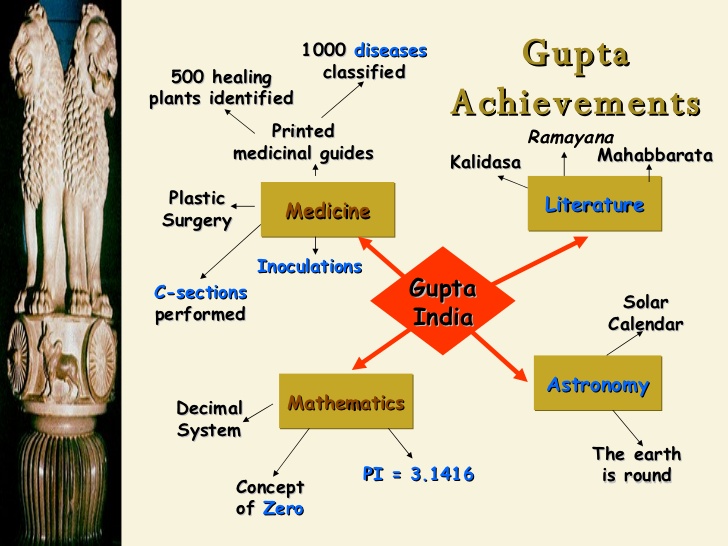 India: Achievements Of the Chandragupta Maurya

India: Achievements Of the Chandragupta Maurya - It is believed that a wealthy family from Pragya or Magadha which is now Eastern Uttar Pradesh had started the Gupta Dynasty. The family gained a lot of prominence during the latter period of the 3rd century. Chandra Gupta, I was the third king during the Gupta period and was accredited for founding the Gupta Dynasty in 320 AD.

It is still quite unclear whether 320 AD is marked as Chandra Gupta’s accession or whether the kingdom attained status of being fully independent then. By various means like having marriage alliances and militaristic expansion, the surrounding kingdoms were controlled by the Guptas, gradually during the decades that followed. In 330 AD, Samudra Gupta, son of Chandragupta was anointed king.

The Pataliputra city was established as the Gupta capital by the new king. It was from this administrative base that growth of the empire was initiated. Many smaller kingdoms were included in the Gupta Empire by 380 AD approximately, which extended from kingdoms in the east and northern territories near the Himalayan ranges and Nepal and Indus Valley towards the west. The Gupta rulers also got a number of defeated rulers reinstalled and permitted them to continue running the territories as tributary states.

Achievements Of the Chandragupta Maurya

A new threat from a group called the Hunas was faced by the Gupta Empire around 450 AD. This group was known as the Hephthalites to the Byzantine sources and they began asserting themselves in the northwest region of the empire. After years of peace, the military prowess of the Guptas had diminished when around 480 AD an invasion on full scale was launched by the Hephthalites. There was a lot of resistance from the Gupta Empire but it proved to be ineffective.

In the northwest, the tributary states were conquered swiftly by the invaders and pushed into the territory controlled by the Guptas. By the year 520 AD there was hardly any territory left as it was reduced to a smaller kingdom. The Guptas were now paying tribute to those who conquered them. The Gupta Dynasty dissolved completely by the mid century.

A lot of archeological and literary evidence that dates from this period depicts that the rulers were not only keen on political control expansion, but developments in culture as well. Period of the Guptas is called the Golden age. A lot of achievements in philosophy, literature, architecture, art and music mark this period. There was a pilgrim from China, named Fa Xian who in the early period of the 5th century travelled to India during the Gupta period. He wrote a lot about the fine universities and hospitals, beautiful cities and prosperous people of India.

Under the Gupta rule, interest in Hinduism was also renewed. During their reign, Buddhism gradually declined and received lesser royal patronage in Northern India as compared to the preceding Kushan and Mauryan rule. As far as intercultural influence is concerned, there was no other style that could have had a greater impact on Central and East Asian Buddhist arts than those that had developed during the rule of the Guptas. Sherman E. Lee was inspired by the situation and referred to the sculpture style under the Gupta rule as ‘The International Style’.

During the Gupta age tremendous scientific progress was also seen. Several notable scientists rose and important advancements were made in science, during the Gupta period. Metalurgy was one area in which a lot of progress was made an example of which is seen in the Iron Pillar located in New Delhi. Since 16 centuries now, the pillar has been exposed to ravages of different weather changes and time, but it has not rusted yet. Buddha’s statue at a height of 25 meters, made in copper and coins from this period prove as evidence of developments made during the Gupta period.

Aryabhatta was the famous scientist, astronomer and mathematician during the Gupta period. The value of ‘pi’ was calculated by him. The formula to calculate the area of a triangle was developed by Aryabhatta. He was the one to prove that the earth rotates around its own axis and revolves around the sun. This knowledge he used to discover the causes of lunar and solar eclipses and also made predictions about the timings they would occur. He was also successful in proving that moon and other heavenly bodies are spherical in shape and shine since the light of the sun is reflected by them.

Achievements Of the Chandragupta Maurya

He made a calculation on time taken by the earth for completing one revolution around the sun. He arrived at a figure of 365.3586805 days which is extremely close to the estimates made in the recent times.

Literature During The Gupta Period

During the Gupta period, the greatest beneficiary was Sanskrit literature. Under the rule of several kings, tremendous patronage was enjoyed by Sanskrit literature. Around 9 poets were set by Chandragupta II in his court termed as the nine jewels. Kalidasa the poet was the greatest amongst them. Kalidasa composed some great epic poems and was an excellent dramatist. Raghuvamsha and Kumarasambhava were the two epic poems and his major work besides, Shakuntala, the great drama and Meghaduta the lyrical poem.

Final shape was gained by the Purana’s a set of books containing a collection of ritual description, philosophical dialogue and myths which dates back to the period of the Vedas. A lot of historical information and text in vast volumes is available in the 18 Lesser Puranas and 18 Great Puranas which are contained in the Puranas collection. An important book on religion called the Vishnu Purana is also well known. During the Gupta period, apparently important was the Durga Goddess who was been beautifully depicted in many of the sculptures that time.

Causes Practices and effects of wars 4: Effects of War Related NotesAlluri Sitarama RajuEffects of war are both long term and short term and they are wide spread. What happens to the soldiers and civilians are different, nevertheless both suffer in times of war. The wars of the twentieth century

Democratic states - Political, social and economic challenges One of the reasons for both the world wars was to stop the spread of communism into different parts of Europe. The system was seen to be very effective and it was accepted by the people as class hierarchy was being quashed.

Buddhism Buddhism is a philosophy and religion that follows practices, traditions and beliefs in a wide variety which are based on the Buddha’s or Siddhartha Gautama’s teachings. In Sanskrit and Pali language, Buddha is known as ‘The Awakening’. Mahayana (Greater) and Theravada (The School of the Elders) vehicle are the