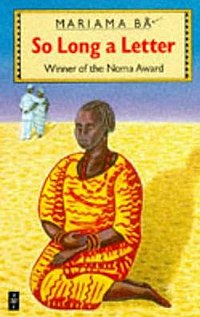 So Long a Letter

Ba, Mariama was a Senegalese feminist and author who wrote in French. She was born on 17th April 1929 at Dakar, Senegal. She died on 17th August 1981 at Senegal.

‘So Long a Letter’ is a novel about Ramatoulaye Fall and Aissatou, her best childhood friend. In adulthood, their paths diverge, with Ramatoulaye living in Senegal while Aissatou migrates to America. Modou, the husband of Ramatoulaye, dies of heart attack suddenly after which she has to follow a four month and ten day process of mourning, a culture followed by the Muslim Senegalese.

Ramatoulaye writes letters to her friend Aissatou describing the flooded emotions she experienced about the way he died and feelings after his death. In her letters she also discusses how her husband Modou had also betrayed her after 25 years of marriage by marrying another woman. In her letters she describes in details, ways in which she dealt with emotions, the betrayal and how she was able to grow through everything that happened in her life. While reminiscing about her shared adolescence and childhood, Ramatoulaye recounts her life’s latest events. The divergent adult lives of both the friends, their shared past, ways in which tradition can be bucked by women and new roles and spaces can be created for their daughters and themselves have been discussed in ‘So Long a Letter.