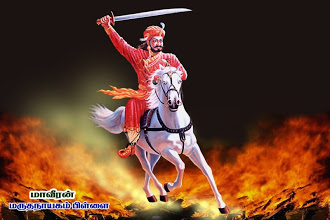 as a peasant, he joined the Arcot troops as a warrior and then joined the troops of the British East India Company as Commandant. He was used to suppress the Polygars in the southern part of Tamil Nadu, both by the Arcot Nawab and British. When rule of the Madurai Nayaks ended, he was entrusted administration work in the Madurai country. Dispute arose between the Arcot Nawab and the British after which his associates were given bribes to capture him and he was hanged in Madurai in 1764.

Maruthanayagam-Muhammad Yusuf Khan was a remarkable man who rose to the pinnacle of royal power due to his military genius and become a ruler. His comrades-in-arms turned treacherous and he lost it all within a few years. In a report ‘A view of the English interests in India’ republished in 1867 in Madras, it is stated that his vigor and executive abilities are notable in his whole administration in Madura and Tinnevelly. His world was unalterable and justice was never questioned. Besides this, his measures were not only combined happily but executed firmly. Once found guilty the person could never escape the punishment Maruthanayagam ordered. No complexion or climate could surpass his integrity, vigor and wisdom.