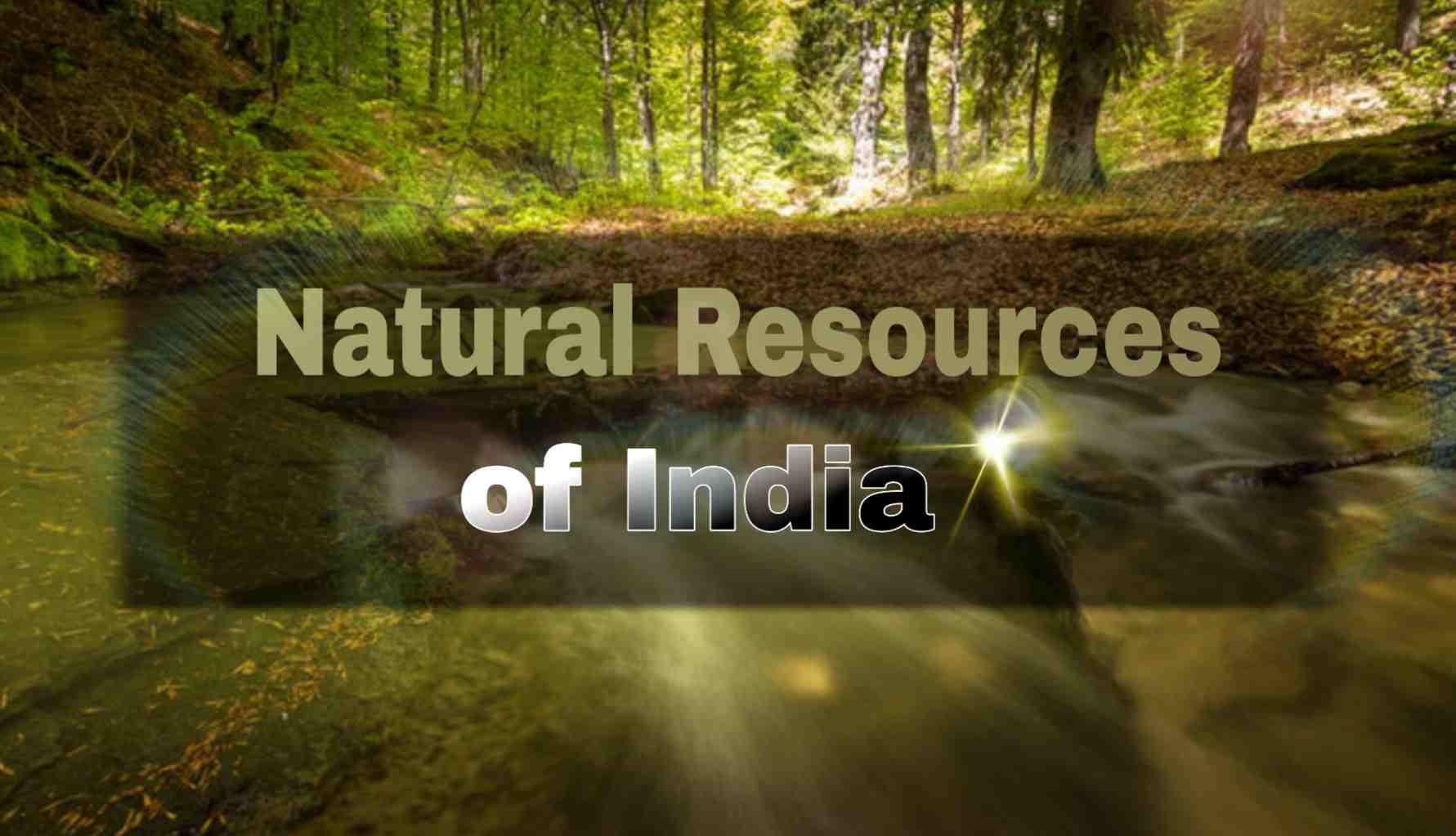 1.Natural Resources
Things given by nature are termed as natural resources. These resources are found under and above the earth’s surface. Natural resources found in India include mineral ores, land, animals, fisheries, forests and energy sources like uranium, gas, petroleum, etc which play a vital role in the economic structure and development of the country.

Land Resources
India has a total area of 32.87 crore hectares with 21.02 % of it being covered by forests. Huge land areas are used for cultivating food grains.

Forest Resources
As per 2007 census, the forest cover in India is 21.02 percent of the total geographical area. Dense and open forests cover over 8.35 million hectares in the country. Maintaining ecological balance is important. As per the National Policy on Forests in the year 1988, around 33 percent of the area in India should be covered by forests.

Diamond
Diamond reserves are mostly available in the Rammallakota of Kurnool district of Andhra Pradesh, Basin of Krishna River and in Panna (Madhya Pradesh).

The latest kimberlile fields are found in Pastar and Raipur districts of Chhastisgarh, Raichur-Gulbarga districts of Karnataka, Narayanpet - Maddur Krishna areas of Andhra Pradesh and Bargarh and Nuapada districts of Odisha.

Limestone
Limestone is found in most states in India with the leading state being Andhra Pradesh, followed by Gujarat, Tamil Nadu, Rajasthan, Chhattisgarh, Karnatka, Odisha and Madhya Pradesh.

Crude Oil
Gujarat and Assam are the important places where oil is explored. Oil resources are being explored in many other states of India as well.

3. Iron Ore
Top grade iron ore is found in the Bailadila sector of Chhattisgarh, the Barajamda sector in Orissa and Jharkhand and in Bellary-Hospet area of Karnataka. While magnetite resources are located in Kerala, Karnataka, Tamil Nadu, Andhra Pradesh, Rajasthan, Jharkhand and Goa, there are Haematite resources found in Rajasthan, Orissa, Andhra Pradesh, Jharkhand, Maharashtra, Chhattisgarh, Goa and Karnataka.

6. Magnesite
Rajasthan, Tamil Nadu and Uttaranchal have major deposits of Magnesite while minor deposits are found in Kerala, Jammu and Kashmir, Himachal Pradesh and Karnataka.

9. Tungsten
Degana in Rajasthan has the main reserves of tungsten, besides Andhra Pradesh, Maharashtra, West Bengal and Maharashtra.

14. Mica
Sheet Mica is produced in very large quantities in states like Rajasthan, Andhra Pradesh, Bihar and Jharkhand in India.

15. Gold
The Ramgiri Gold Field in Andhra Pradesh as well as the Hutti Gold Field and Kolar Gold Fields in Karnataka are rich important gold fields.

3. Biotic Resources
Living resources like animals and plants are called biotic resources. They play a vital role in the environment’s biotic section for development of the nation. The vegetation of India is varied and rich and the animal life is equally diversely rich. As per the palaeo-botanists, the Thar Desert and Indo-Gangetic Plain in India is abundant with exotic plant species while the Peninsular and Himalayan areas are covered with endemic and indigenous plant flora.

The exotic plant species that have migrated from the trans-Himalayan regions, amount to almost 40 percent. Classified as boreal, the natural vegetation in these areas includes the coniferous forests.

Rainfall is higher on the western slopes of the Western Ghats which makes it abundant in evergreen forests. Tropically wet evergreen forests are found in Assam and Kerala. A vegetal cover of thorny bushes and deciduous trees is seen in the drier regions of Rajasthan, Gujarat and Central India. In the Himalayas, there is an altitudinal change in the forest cover.

While conifers grow in the higher slopes, broad-leaved deciduous trees are found in the valley bottoms. The forest cover is thicker in regions have low population density or in areas that are not very easy to access. Tropical deciduous vegetation comprising of monsoon forests extends between zones having rainfall between 100 cm and 200 cm.

As far as the North Indian Plains are concerned the region does not have forest cover .These plains extending from Punjab to West Bengal have extension of cultivated land and high pressure of population. Firs, deodar and pines in particular grow in abundance in higher altitudes in Jammu and Kashmir, Himachal Pradesh and Uttarakhand.

The Himalayan terrains are covered by broad-leaved teak and sal trees. Valuable timber is provided by these trees. Along the coastal areas, mangroves are found. Sundari trees grow in abundance in the Sunderbans. Karnataka is known well for its sandalwood forests.

Forests in the uplands of India are cleared, encouraging grasslands in the Uttarakhand hills, Himachal Pradesh and Kashmir. Grasslands are also found in the lowlands including Assam and the Indo-Gangetic plains. Elephant grass is found in

Different kinds of riverine grasses like the elephant grass in Punjab and the Bhabhar grass in Terai are found in India. Cattle in huge varieties like the buffaloes like Mehsana and Murrah and cattle like Sahiwal, Hissar and Gir are generally associated with the grasslands.

The main factors which influence siting of a hydro-electric power plant are many. One of the important points to be noted is precipitation. The character, amount and distribution of precipitation in different form like rain, snow decides the potentialities of power of any region. For example you cannot have water

Erosion In the process of erosion, a natural removal of rocks and soil takes place from the surface of the Earth. Soil and rocks get moved by the flow of water and wind and they are transported and deposited at different other locations. What Is Erosion Soil erosion process is