Pol Pot was a Cambodian leader 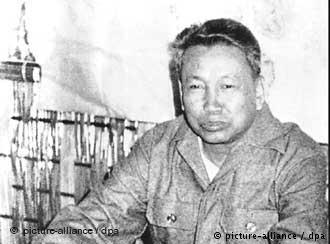 Pol Pot was a Cambodian leader, revolutionary and communist. Ideologically he was a Khmer and Marxist-Leninist nationalist.

Pol Pot was born on 19th May 1925 in Kompong Thom Province, Cambodia. He died due to natural causes on 15th April 1998 at Anlong Veng District, Cambodia.

Pol Pot was a mediocre student, studied carpentry at a technical school and went to Paris to study radio electronics. He became involved in the French Communist Party there and joined a group of young left-wing Cambodian nationalists who became the Khmer Rouge fellow leaders later. Compared to studies he focused more

on revolutionary activities. In 1953 he returned to Phnom Penh after failing in his exams. Building up the Communist Party of which he was the secretary, took him 12 years. In 1975 to overthrow Lon Nol’s regime he led guerilla forces of the Khmer Rouge. From the year 1976 to 1979 he served as Prime Minister of Democratic Kampuchea. From 1963 to 1997 he led the Khmer Rouge group.

People of Cambodia underwent severe hardships, under Pol Pot’s regime. People in millions were impoverished, were evacuated in masses, displaced, killed and faced brutality under the radical communist government.

After Cambodia was invaded by Vietnam, Pol Pot was removed from Khmer Rouge’s political and military leadership in 1985, but he continued his guerilla campaigns but with lesser intensity. The Khmer Rouge was in deep decline by 1997 and factionalism and desertions riddled their ranks. He was ousted from leading the organization in June 1997 and put under house arrest by his colleagues and convicted of treason in July 1997.

In January 1979 he was overthrown by the invading Vietnamese. Under Pol Pot’s leadership from 1975 to 1979, people in millions died from execution, forced labor, disease, torture and starvation while the program of radical agricultural and social reforms were carried out.

Outrageous effects of the Khmer Rouge were seen. Pol Pot envisioned that by any means, Cambodia would be equal and accordingly he thought of sending farm people to the city and city people to farms. He failed in getting expected results from the people and so punished the Cambodians, deprived them of rights to nutrition, medication and education. Approximately 2.5 million people were executed as they did not follow his ideals.

Pol Pot was also known as Saloth Sar, originally but in July 1970 it changed to Pol Pot officially.

Pol Pot’s followers called him ‘Brother No One’ when Cambodia was invaded in 1979 by Vietnam.

In history, Pol Pot has been named one of the worst leaders.

Freidrich Ebert was born on 4th February 1871 and was a politician who rose up in the ranks to finally occupy the post of the President after World War I. Ebert was born into a large family and was very interested in studying but due to poor financial situation his

What Woodrow Wilson (USA) wanted from Germany after World War I and why? Woodrow Wilson was born in 1856 and died due to a stroke in 1924 during his second term as President of the United States. He was the twenty eighth President of USA and served 2 terms from