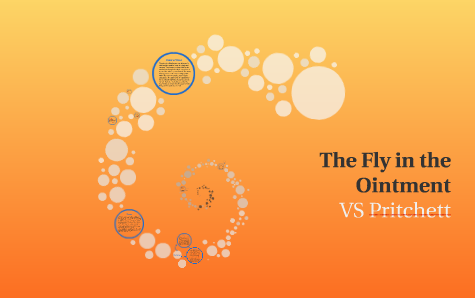 The Fly in the Ointment

The Fly in the Ointment – VS Pritchett – VS Pritchett was a British novelist and short story writer. His father in trouble with creditors most of the time, so the family moved towns frequently, living with diverse relatives to escape creditors. Many of his stories are intensely autobiographical drawing on his experiences and the character of his father. Pritchett himself did not do anything for long; perhaps the disturbed childhood had affected him adversely. Nevertheless, he was a powerful writer and was awarded the title Companion of Honour and knighted in 1975. Pritchett lived up to the age of 97.

The setting is the defunct factory of the father who has just been declared bankrupt. Everything of any worth has been taken away by the creditors. Though the factory is an empty shell, the sign outside the entrance to the factory is freshly painted and the brass plaque outside the office is shining.

Characters – The Fly in the Ointment

There are only two characters in the story, Harold and his father.

The character of the father has been influenced by Pritchett’s perceptions of his own father. Harold’s father is a mixture of bravado and weakness; he is shifty, boastful and dishonest. He puts of a veneer of normalcy which cracks every now and other revealing the truth that lies beneath. Father never misses an opportunity to deride his son’s position in life trying even to undermine his confidence by making negative comments on the bald patch on his head. There are two traits in the father that constantly fight for ascendency – the over confident, smooth and eager-to- be-friendly persona and the mean and brash one that can hit below the belt.

Harold has no illusions about his father. He has wriggled free and made a life for himself somewhere though he does not have much money. In a vague way he feels he should help out his father but probably also knows that any money that he lends will be lost forever. He is aware of his father’s wheeling-dealing ways and does trust him. He can see through his father’s double personality but at the same time feels in some way responsible to help. Not helping makes Harold feel mean and disloyal.

The dysfunctional relationship between the father and son is the main theme. The father is dishonest, imprudent with money, deceitful and the son is sensitive, not successful but content with what he is doing. He does not want to have any truck with the father because he cannot be trusted but he feels impelled to help him in some way. The only help that he wants is money.
The father professes that he now is free of any desire for money but the real “fly in the ointment” is that he cannot change his true nature. He has always has had this lust for money and that cannot be killed so easily.

The mask that the father wears of being above the greed for money falls apart as soon as the son talks of raising money. Miraculously a silver topped pencil appears in hand of the father and he is back in business.

Harold is on his way to meet his father who has been declared bankrupt. The factory is empty though a semblance of normalcy is maintained with polished brass plates. The father with a false cheerful air goes on about as though this is all part of a day’s work. The father is mean to the son, trying to deflate his confidence with sly references to his modest job and the bald patch he is developing. There are moments when the father appears old and vulnerable but at the core he is the same.

Summary – The Fly in the Ointment

Harold is on his way to meet and commiserate with his father who has gone bankrupt. The liquidators have gone off with everything that is of any value. But the father talks as if that is no great matter as he is now free of the curse of greed for money. Harold knows his father too well. The fly in the ointment of leading a simple life by the sea is the father’s lust for money. The fly hovers just out of reach of Father who tries to kill it. This can be seen as soon as Harold talks about raising some money to help his father. The father forgets all his earlier claims of not wanting money for himself. Miraculously, a pencil appears in his hand and he says,” Why didn’t you tell before you could raise money?”

A fly in the Ointment has just two characters and it depicts a dysfunctional relationship between a father and his son, Harold. The father is an aggressive personality. There is a streak of dishonesty and cruelty in him. He has just gone bankrupt but has the attitude that it is for the best. He claims he has no need for money but plans to live by the sea enjoying the sun and surf. The hurdle to this plan of living without money is the greed for money which he can’t shake off. Harold knows this fatal flaw in his father but even when the father is mean to him, speaking disparagingly of his job and his physical appearance, he tries to help. The father has a mask on all the time that slips every now and then.

The fly that buzzes about in the father’s office evading his efforts to kill it is a symbol for his lust for money that he tries to overcome but does not succeed. The fly shows up his weaknesses and makes him appear an old man.

The father enjoys needling Harold. He inverts the old saying and asks,” Haven’t lost sixpence and found a shilling have you….?” He says,” If you came in now and offered ne a thousand pounds I should laugh at you” to make Harold believe that he has got over his love for money. But in the next breath he makes grand plans for a life by the sea.

The father’s weakness for money is projected as a fly that he is not able to conquer. ”You know – ‘ the father said uneasily, flitting a glance at the fly on the ceiling as if the fly as well as his son to listen to what he was going to say”