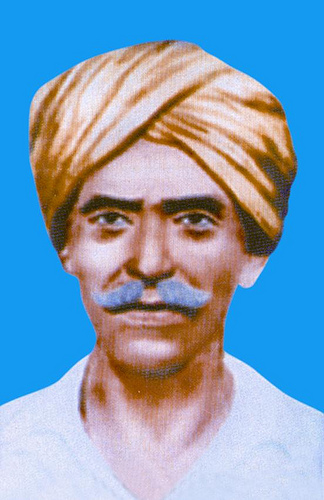 The tribal leader Komaram Bheem (October 22, 1901 – October 8, 1940) was a born to a Gond tribal family, in the Komaram Bheem forests in Asifabad District, Telangana State. He had not received any formal education nor was he exposed to the outside world. To liberate Hyderabad, he fought against the Asaf Jahi Dynasty. In the guerrilla campaign, he fought against the ruling Nizam government openly. When he found anyone living off the sustenance of the forest, he defied the law and court. Till his last breath he fought Babi Jhari and took up arms against soldiers of the Nizam Nawab.

The tribal leader Komaram Bheem was against women being dishonored, unjust practices, exorbitant taxes, men being harassed for unknown reasons, atrocities against and overexploitation of people. Forest officials killed his father for asserting rights of the adivasis, when Bheem was just 15 years old. It was after this that Bheem’s family migrated to a village named Surdhapur. It was Komaram Bheem the brave warrior of Telangana who gave the slogan, ‘Jal, Jungle, Zameen’ which means that people living in the forests should have rights on every resource of the forests. The Nizam’s police force attacked the brave Bheem and the fearless Gonds with guns, but finally he became an eternal hero and deity to the tribals. He passed away in Adilabad district.

Roshan Singh (January 22, 1892 – December 19, 1927) was born in Shahjahanpur. He was an Indian revolutionary. He was not only a good at wrestling but a sharp shooter as well. In the 1921 – 1922 Non Cooperation Movement, he was sentenced in the shooting case at Bareilly. In

Subhash Chandra Bose Subhash Chandra Bose one of the most prominent leaders in the freedom struggle of India was born on 23rd January 1897 in Cuttack, Orissa, India. He passed away on 18th August 1945.  He was born to a religious and pious lady, Prabhavati Devi and a famous lawyer,

V.O. Chidambaram Pillai, popularly known as V.O.C, Kappal Ottiya Thamizhan and Va Voo Cee was born on September 5, 1872 at Ottapidaram,  Thoothukudi, District, British India. He died on November 18, 1936. This Tamil political leader was member of the Indian National Congress and also the Indian Independence Movement. This