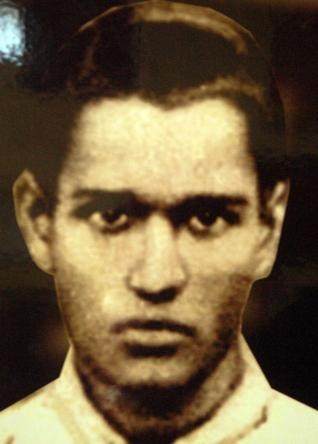 Vanchinathan Iyer born in 1886 at Sengottai also known as Vanchi was an Indian Independence activist from Tamil Nadu. Shankaran was his actual name. He took his formal education in Shenkottai. After marrying Ponnammal he took up a lucrative job in the government sector. He is remembered well for shooting dead the District Tax Collector of Thirunelveli, Ashe also called as Collector Dorai. When the Collectors train halted at Maniyachi station en route to Madras, Vanchinathan shot him dead at point blank range. Thereafter in order to evade arrest, he committed suicide.

The main motive for shooting Ashe was the closing of the Swadeshi Steam Navigation Company. It was V.O. Chidambaram Pillai who started the company and Ashe wanted to bring about a closure of this company. Vanchinathan Iyer wanted to make Ashe pay for his actions. Ashe boarded the Maniyachi Mail at 9.30 am on June 17, 1911. When the train pulled in at Maniyachi, he pulled out the Belgian-made Browning automatic pistol and shot at Ashe. Vanchinathan ran along the platform, after the shooting, hid in the latrine, but later he shot himself, in the mouth. A letter was found in his pocket in which he had written that he was dedicating his life as a small contribution to his motherland and that he alone was responsible for the assassination. Both Vanchinathan and Ashe were dead, by the time police arrived.

Continuum by Allen Curnow Lines 1-2) The poet creates an image of night-time and describes the rising of the moon as the night progresses. He metaphorically hints at his frame of mind. The moon in the poem symbolizes the human mind, while the house is symbolic of the body. In