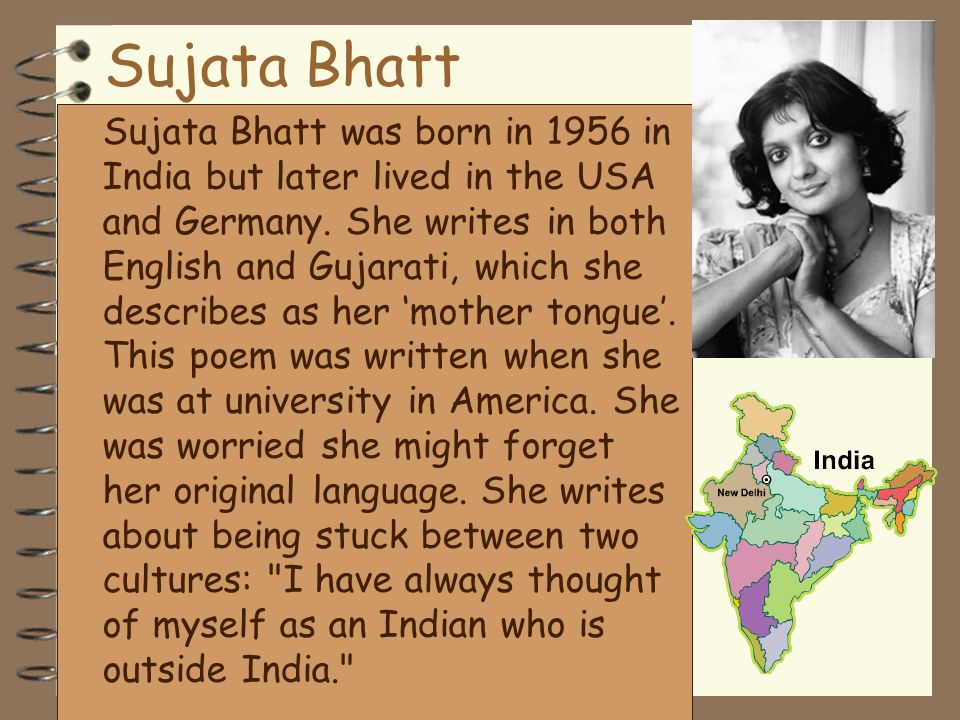 Analysis of 'A Different History', by Sujata Bhatt:

The poetess Sujata Bhatt, while writing this poem has given importance to the culture and various religions in India. She has emphasized in her poem by repeating words and questions and thereby making her poem stronger. She writes about Indian traditions, lost identities, importance of language, cultural difference to create different moods and themes. In the first part of the poem, she concentrates on respect for education and learning. She claims that in Indian religion every object is sacred. There is God in trees. You should treat your books as the goddess of knowledge. You should be gentle when turning the pages of the book that you read for knowledge of religion.

She has written this poem describing the British colonization days when the British oppressed the Indians. They force them to learn the English language though in India various languages were spoken. She is angry at this attitude of the British. She also explains how British tried to change the identities of the people of India with a scythe. She claims that the future generation will love this strange language like they love their mother tongue. According to her language had been used as a weapon to target its victims in a figurative sense.

The poem appeals to the reader because it is full of culture of a different country. In the initial stage it is descriptive and then changes to interrogative. The cultural background of Sujata is reflected in the first part of the poem. She has referred to God and books to talk about Indian culture. As you read the poem further you realize that she is talking about learning a new language. She admits that, in spite of having to learn 4 languages she had to adapt herself to the English language. She compares herself with any one, who would feel scared to learn a new language because of ending up in making mistakes.

She is of the opinion that when you learn a new language, its start dominating you especially when it is the linga Franca of a particular country. It is just like the British forced upon India to adapt to the English language. She also suggest in her line ‘languages kills’, she is against this forced learning. But she claims that after a few years, they all speak the language which they are forced to, sacrificing their culture. In this way the children grow up forgetting their mother tongue and learn a foreign language and even adapt to their culture.

There are some readers who feel that ‘A Different History’ is a poem that tells us about a different language. It also tells how a change of culture affects the people of a country. This is when a foreign rule forces you to adapt to their life style, learn their language and inculcate their culture in you. She makes references to Indian gods and goddesses. This makes the poem appealing as the reader wants to gain knowledge and learn about Indian culture. But as you read further it is about learning a new language. She claims that she found it very hard and had to go through great difficulties in learning the Indian traditional language and the English language. She calls this language as a strange language because at that time she was very young. She refers to this foreign language as an oppressor language. It affects not only the mother tongue of the people but also changes their
culture, way of living and many adapt to new religion.

Sujata Bhatt was born in Pune in the year 1956. At the age of 12 she migrated with her parents to the US. She completed her education and received a Master’s in Fine Arts from the University of Iowa. Later in Canada she went on to be a resident writer at the University of Victoria in Canada. In recent years she was in Pennsylvania at Dickinson College as a visiting fellow. She is a well known poetess at present and resides in Bremen, Germany with her daughter and husband. She has won accolades and awards for her poems not only in Asia but also in other parts of the world. In 1991 she receives a Cholmondeley.

Sujata considers language as a physical act of speaking, which is synonymous with the tongue. She considers her mother tongue Gujarati and her childhood in India as the deepest layer of her identity. Then ironically she claims that she has chosen English as the language she speaks in. She uses the same in her daily life and by large chooses to right her poems in English. In most of her works she depicts repercussions of this divided heritage. She explains the complex status of English. She has the art to convey ironically the beauties of English and colonial implications in her poem in a different history.

She informs about her grandfather being in prison during the British days who in order to comfort himself during his time in prison read Tennyson. She has written wonderful poems but all of them had some or the other relation with Indian and Western culture. Sujata acknowledges that language splits you from experience but through the strength of her writing she brings you closer to it.

In conclusion Sujata Bhatt expresses to the generation of today by giving example of the British rule in India. How many Indians had to give up their culture, their mother tongue and forced to do everything English. Of course today such type of an oppressive rule is impossible. You cannot force someone to change his religion or culture and learn a foreign language under duress. The British not only brought about a change in India but also in all its colonies spread over the world. Today English has become an international language. But if you ask anyone who is not a British how he feels about the language, most of them will be proud to tell you like the poetess herself that they have been educated in English. And this is the language in which they freely converse and they are comfortable with.

Analysis of 'A Different History', by Sujata Bhatt