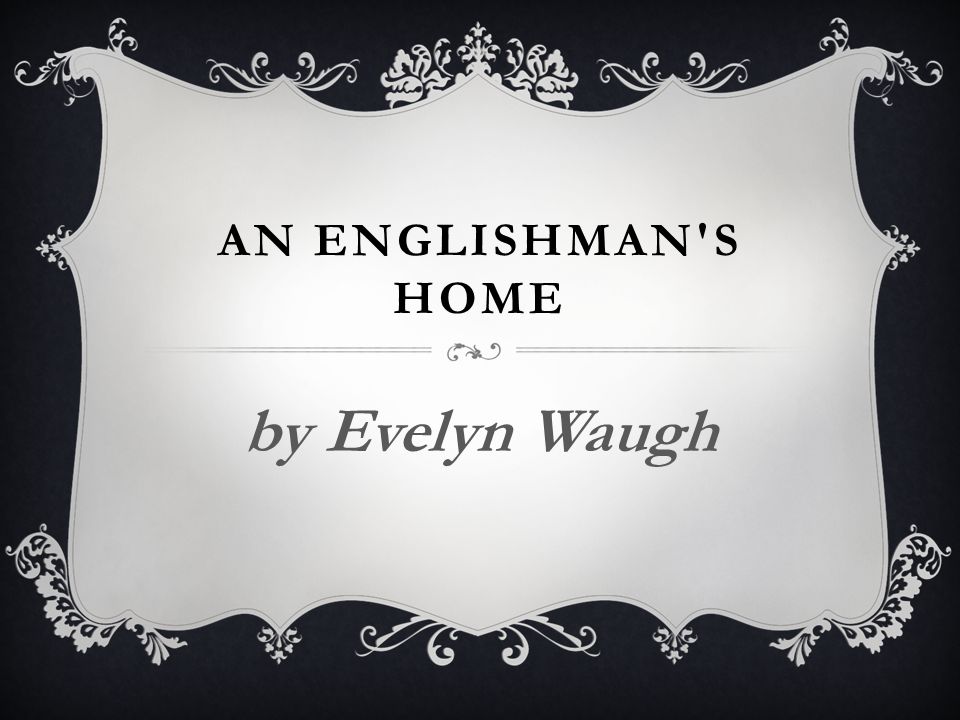 Analysis of ‘An Englishman’s Home’ by Evelyn Waugh

Analysis of ‘An Englishman’s Home’ by Evelyn Waugh – Evelyn Waugh is considered to have been one of the best writers of English prose in the twentieth century.  Sharp wit and satirical insight mark most of his writing. He was capable of fictionalizing even the most disturbing events of his life, his mental breakdown, for example. He is best known for his novels like Brideshead Revisited and A Hand of Dust but his short stories are also splendid specimens of writing. Though he satirized the snobbery of the upper classes, he was at home in their country residences. He longed to be one of them; he was a snob himself. This double standard made him unpopular in England after the war. Bad health and lack of money dogged him. He died in 1966.

The title is obviously taken from the saying “An Englishman’s home is his castle”. Waugh was sensational in the use of his sharp wit and satire. In this story, the land that most had recognized as being part of their common heritage is bought by a pair of brothers to be used for building a factory. This threat brings together unlikely people who try to thwart it. They are indeed able to do it though in the process, they spend more money than was wise. Only later do they realize that it was a scam played by the brothers to make money.

Main Themes – Analysis of ‘An Englishman’s Home’ by Evelyn Waugh

The setting is a typical English village where people are inclusive and unwelcoming. When Mr. Metcalfe comes back from India where he has made money in trade, he plans for himself the life of gentleman. But the attitudes are far from welcoming. The old residents cannot abide a stranger in their midst and make it obvious that he is not wanted there.  It is when the village is faced by another threat that they look at him in another light. But the old residents do not want to get too involved though they resent the newcomers who want to change the face of the village. While the old residents are snobs, Mr. Metcalfe is pretentious. He thinks he can win over the gentry with the display of his money. But he has to contend with their insular attitudes.

Traditional wealth frowned upon wealth gained from commerce. Old wealth came from land and titles. The men did not have to do any work. They had tenants who cultivated the land and staff who looked after the management of buildings. Men hunted and shot game. Women preened and gossiped, nothing else was expected of them. These attitudes changed only after the world wars.

Characters – Analysis of ‘An Englishman’s Home’ by Evelyn Waugh

Mr. Metcalfe has made money in India by dealing in merchandise. When he winds up his business and gets back to England, he wants to live the life of a gentleman. What he needs is a house in the country. To that end, he buys land. Immediately, he encounters opposition. The locals do not want a stranger in their midst; all their insular attitudes come to the fore. However, he buys his land and proceeds to build on it. Problems start for him when the Hornbeam brothers arrive planning to buy land for a factory. No one wants a factory in their neighborhood. The locals turn on Mr. Metcalfe for leaving land available for the brothers. The only way out is to buy the land back from them and Mr. Metcalfe has to spend more money than he had planned.

She represents the old money in the village. Peaburys have been around the place for years and nothing happens there that they do not approve. When Metcalfe comes there, she is not pleased. She does not want the place polluted with money made from commerce. But when there is an outside threat, she comes around. Along with Mr. Metcalfe, she buys the land from the crooked brothers. She ensures that the housing project carries her name.

Summary – Analysis of ‘An Englishman’s Home’ by Evelyn Waugh

Beverly Metcalfe aspires to be a squire and he made money back in India as a tradesman. But money is not enough to jettison him into rarified high society. Nevertheless he tries. And meets with part success. The locals know that he is not “old money” so they are condescending. Trouble begins when a scam is hatched by two brothers who buy the land adjoining Mr. Metcalfe’s. They claim that they plan to build a factory on it. This sets the cat among the pigeons. No one wants a factory amidst their homes.

The locals blame Mr. Metcalfe for not buying the whole property and most of the old rich just talk without doing much. Finally, Lady Peabury and Mr. Metcalfe put up money buy the land off the brothers for a higher price. Turns out this was exactly what the brothers had intended to happen. It is a heist they have successfully pulled off in other villages also. Lady Peabury and Mr. Metcalfe float a real estate company. The old money is not happy but can’t do much.