Analysis of ‘Running in the Family’ by Michael Ondaatje 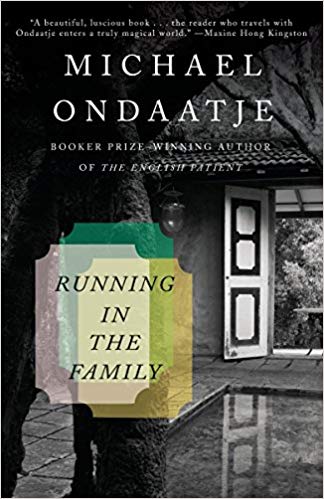 Running in the Family

Running in the Family is a fictional autobiography of Michael Ondaatje. This means that facts and fiction are combined in this novel. Philip Michael Ondaatje is a Srilankan poet, essayist, fiction writer, filmmaker and an editor working in Canada. He has received many awards of which some are the Governor General’s Award, The Booker Prize, The Giller Prize and many more. Canada has recognised him as the renowned author and has conferred him the post of an Officer in the Order of Canada. Ondaatje has been a crucial force in bringing in a change and freshness into Canadian literature.

The novel Running in the Family chronicles Ondaatje’s life and he attempts to get a better understanding into the lives of his parents and relatives. The novel has seven big chapter and they have some sub chapters as well. The novel begins with the dream about Ondaatje’s father’s death. He had been planning to go to his place of origin, Srilanka, to find his roots or rather find how he became what he was currently. He realises his answers lay in his hometown and he takes a journey to Srilanka with his siblings joining him too. In the second chapter the focus is on the family and he gets a lot of inputs from his sisters, brothers and relatives. His father’s character is named Mervyn and this novel is almost a memoir about his father. Mervyn at the young age of eighteen moves to England saying he has got admission in Queen’s College. After three years the family realizes that he did not study at all but was reading up whatever struck him. All the money sent for studies was used up for other activities. He tried to soften the initial reaction by saying that he was going to marry Kaye Roselap a prestigious lady in England. This calms the family but he actually married a very ordinary woman but now it was too late for any action. Mervyn’s family was rich but he was into alcoholism.

The third chapter is a travelogue of Srilanka and the novel moves on to the flora and fauna of the place where Mervyn lived. The author dedicates some pages for his grandmother who was vocal and selfish. The author felt that his father’s behaviour was a chip off from the old woman. In the next chapter he looks into how his parents got married. Soon alcoholism and depression get the better of Mervyn. Ondaatje believes if his father had a confidante, which he did not have, he would not have been lost to alcohol and depression.

Characters in the novel

Michael Ondaatje is the narrator of the story. He is on a trip to know his roots and he records his stories and travels. He wanted to preserve his family tradition and also understand his parents better.  All through the novel Michael travels inside and gets a better insight about himself. Michael’s father is also a mysterious man. He could have been educated but chose not to. He became a self-learner and independent with no one in his close circle. He slips into alcoholism for which he repents but cannot be saved. He too struggles for an identity. Another character that has been given some flesh is Lalla, Michael’s grandmother. She is very boisterous and not too caring about others. Doris Gratein, Michael’s mother also was a strong woman.  The others in the characters are Michael’s siblings.

Some of the themes in Running in the Family are the fragility in love and marriage, how the past affects the present and that truth changes according to perception and time. Marriage and love had become very fragile as divorces were socially acceptable. The mourning of widows and widowers were very short. Love and relationship in a marriage were no longer cherished. Through his experiences Ondaatje or the character he stands for understands he is what he is because of his past.  His past included his parents, relations, society, and culture of the nation. He had lost touch with his past and was not sure why he was like what he was. So a travel to his country and past gave him an insight into himself. On one hand it is a story of his self-identification and on the other hand it is a compilation of history. The third theme is about changes in perception.When events happen there is a perception of the events. When the same events are reviewed after a few years, the perception changes. Ondaatje talks about Lalla, his grandmother. She was a loud-mouthed woman who spared no one. She was perceived as tough lady then but after many years she was accepted as she was and the author even figures out his father was different taking after his mother. And he in many ways was a little like his father.

When a Canadian writer goes in search of his roots in Srilanka, the setting will be varied and myriad. Not to mention a chapter dedicated as a travelogue. The setting therefore moves from Canada to Srilanka and in Srilanka to different parts of the country. The villages and towns are many in the novel Running in the Family.

“Entertaining, a little disjointed but then peoples' lives are. Valuable insight into life in Sri Lanka in the 20th century. I loved the story about the looting rebels demanding the author's airgun. Then they asked for a bat and ball to pay cricket in his garden.” - Edward M. Sedgwick

“Running in the Family is storytelling from all angles. There are Ondaatje’s narrative accounts of his visits. There are tales told by his aunts sifted through Ondaatje’s narrative pen. There are direct first person accounts from friends and family who remember the events in question, told in their voices, sometimes vying for the reader’s attention. There are poems and photos to flesh out the picture. But at its heart, this is oral family history. Its focus is small, direct.” – Andrew Saikali is writer in Toronto Canada. He is also a copy editor with the Mail and the Globe.

Title: Wide Sargasso Sea Author: Jean Rhys Context: Wide Sargasso Sea (1966) is a post colonial and masterpiece fiction novel by Jean Rhys. This novel is her comeback to the literary centre stage.  Some of the most fascinating characters are brought in ingeniously into light in her fiction work. Synopsis:

Background Emma Hardy died on the morning of 27th November, 1921. Her passing seems to have taken Hardy by surprise. Though they lived in the same house, they had been separated for some years. This poem is one of those he wrote on the subject of her death. Though roughly