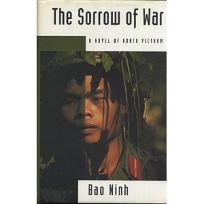 Analysis of 'The Sorrow Of War' by Bảo Ninh

Analysis of 'The Sorrow Of War' by Bảo Ninh - Many war stories especially the Vietnam War stories have been written but The Sorrow Of War stands apart for many reasons. Most of the stories gave an American perspective to the war and the Vietnamese were non-entities. Here is a book was written by a Vietnamese thereby giving the Vietnamese perspective. Bao Ninh, the author, served the Glorious 27th Youth Brigade. The Sorrow Of War is almost an autobiographical story. This story does not deal with mere details of war. But lingers on the human derangement and sufferings due to war. It was Bao Ninh’s graduation project at the Nguyen Du Writing School. This was written in Vietnamese in the year 1990. Was later translated into many languages. That is the recipient of the Independent Foreign Fiction Prize.

The story begins with Kein, the protagonist collecting the bodies of MIA (missing in action). This prepares the reader for the rest of the novel. Kein is the lone survivor of the 27th Battalion. He is assigned into this role of searching and bringing back the dead bodies of people who died in the war. In reality, Bao Ninh was one of the ten survivors of the 27th Youth Brigade. The story of Kein flits back and forth in its narration. It is mostly about the war but he also goes back in time and tells about the love in his life, Phuong.

Kein cannot come out of the memories of war. There is not a second when the thoughts of war leave him. He is tormented by it as there were gruesome acts committed by the enemies and his own people. Even he was a part of some heinous acts and all this kept coming back to him. Suddenly he realizes that he should pour it out in the form of writing. He starts to write his autobiography. He says he is obliged to write about the war as he is the only survivor of the battalion. Kein feels he has to “expose the realities of the war and tear aside conventional images.” But the most the basic drive was to get rid of his tormenting memories going on his head.

While Kein took to writing Vuong a driver and survivor took to drinking to forget all that he had seen and heard. Kein also took to drinking but his literary instinct got the better of him and he tries to escape from his excruciating pain through writing. As he is writing about the war he suddenly goes to his youthful days where he was in love with the young and beautiful Phuong. They are only in their teens and they soon they realize that their lives will drift apart never to meet again. He describes those beautiful moments with a lot of tenderness and at the same time agony.

This was not the state of Kein alone. There were many in the country who lost all that they had back home, be it love, family, house, whatever; there was nothing of it remaining. If there was something of it remaining physically the scars of the war made the comeback too difficult. A generation was lost in the war he says. His memories of Hanoi were beautiful and the new generation is unfortunate because they saw the place after the ravages of war. All through the book, he mentions his lady love but most of the details and the painful parting are mentioned towards the end of the book.

Families were important in Vietnam. Elders were respected, the dead were given a ceremonious burial. Kein could not respect his father till much later in his life when he himself became a man. He helped his father but it was more out of duty and not so much so out of love or respect. The name and honor of the family rested on the respect and the proper burial given to the dead. Kein was a part of incidents that went against his value system. He had to haul dead bodies, dump them into a van and then pile them all together in a pit. The burial that was due to them was impossible. The Jungle of Screaming Souls was haunted by the souls of the dead soldiers.

Kein writes about Quang, a soldier, who was severely wounded. To escape from the pain he begs to be shot and finally uses a grenade to commit suicide. The last thing that Kein hears is the crazy laughter of Quang. Nine years later the MIA team heard this laughter and saw a man with a grenade and when they ran the same crazy laughter followed them. It was believed that the souls of the dead soldiers haunted the place because they were not given a decent burial. After the war Kein builds an altar to honour the dead and appeased the spirits of the dead by burning incense sticks constantly at the altar.

All that Kein wrote would have been lost if a mute girl had not gathered the manuscript and preserved says another narrator. Kein loved this girl too but at another level and the narrator says it was the timely intervention of the girl that helped this story to come out. Bao Ninh has written the novel of Kein writing a novel and the narration is nonlinear. The helplessness of mankind during war times clearly comes out in the novel. There is no time or space for fine feelings; only hardened emotions remain.

What was once thought unimaginable by Kein, like killing and raping, became a part of his life. He had no choice but to go with the tide. As he writes he is ashamed of the things he had done. All those haunting memories become a shade less as he pours out his feelings in words. The Vietnam War was one of the worst tragedies in human history with millions of people dying on both sides and The Sorrow Of War is an excellent recap of the war and its miseries.