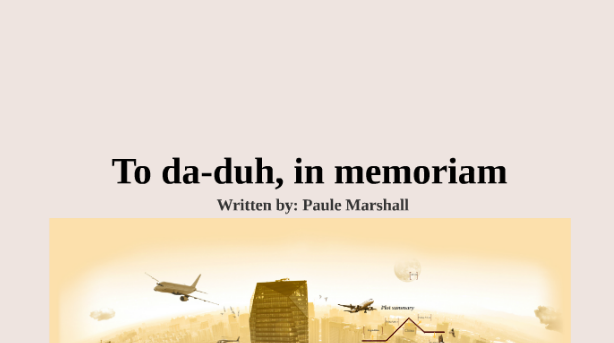 Analysis of ‘To Da – duh, in Memorium’, by Paule Marshall – Paule Marshall was the daughter of Barbadians who several years before her birth had migrated to the US. Though living in the US, the Caribbean influence was very strong in her life. They lived in a locality with a concentration of immigrants from the Caribbean. This way, Marshall picked up the accent and idioms of the language of the islanders. In this story we see the liberal use of their language and references to their culture. This story is about the first visit the author paid to her ancestral place to meet her grandmother who is simply called, Da-duh.

This story is about a visit the author made to Barbados when she was nine years old and met her grandmother for the first time. The story ends with the death of the Grandmother who was called Da-duh by everyone. The story is a kind of tribute to the spirit of the grandmother which enabled her to live happily in her country, following age old customs.

There are several themes woven together in this story. The dominant theme is the inevitable comparison between rural areas of the Caribbean and urban sprawls of the US. There is also the division between extreme youth and old age (Da-duh is eighty). The way the elderly woman viewed the whites (she cannot believe that her granddaughter had the temerity to beat up a white girl in her class) and the way the child who lived in US did, is another theme.

Characters – Analysis of ‘To Da – duh, in Memorium’, by Paule Marshall

The author is the nine year old child who goes to Barbados for the first time to visit her grandmother, Da-duh. Though they have not seen each other ever before, there is a bond between them. The grandmother is sharp and probing but the narrator is able to hold her own easily. She does not let herself be browbeaten by the grandmother’s questions. The grandmother has some pre-conceived notions about US; she is not ready to change it. Hence she asks the same questions again. The child answers her truthfully though she knows that her answers will disappoint Da-duh who is proud of her land.

The grandmother took immense pride in her land. Though she does not say anything complimentary about her granddaughter, she seeks out her company recognizing the bond that exists between them. Da-duh had several notions about how things were in the US. She thought that there were no trees in the US and nothing ever bore fruit.

Initially she has the better of her granddaughter but when she hears the description of snow, her confidence takes a beating. She also has no answer to the towering skyscrapers of US. Somehow she takes it personally and seems to lose her confidence. She loves her house and land so much that she refuses to move out when the planes from UK come. They flew very low and perhaps the fear that they would crash into her house killed her.

The author, as a nine year old girl, goes to Barbados to visit her grandmother for the first time. The grandmother is most comfortable in the countryside where she lives. She has some fixed notions about US from where the granddaughter has come. Grandmother thinks that there are no trees in the US as nothing grows there. She asks the child for confirmation of her notions.

The girl’s answers sometimes make her proud of Barbados. But sometimes she has to admit that there is more to the US than she knows. The child tells her about the largeness of the Empire State Building and she promises to send her a picture postcard of it. But the grandmother dies soon after the child’s visit.

Summary – Analysis of ‘To Da – duh, in Memorium’, by Paule Marshall

The author, as a nine year old girl, goes to Barbados along with her sister and mother, to visit her eighty year old grandmother whom all call Da-duh. The old lady is an indomitable character who takes fierce pride in her land and her way of life. There is an unspoken bond between the author and her grandmother. But they are also in competition. The grandmother believes that her land is superior to that of US. The child agrees that in some ways, it is superior but there are things in US that are larger than anything in Barbados. The Empire State Building, for example. For the grandmother, the tallest object was Bissex Hill.

The child explains about the significance of snow in their lives in New York. These revelations leave the grandmother severely shaken. The child leaves soon after, promising to send a picture postcard of the Empire State Building. But before she can do that the grandmother dies. In 1937, British aircrafts fly low over Barbados. While the rest of the family run to safer places, Da-duh stays behind in the house. When the rest return, Da-duh is found dead in her chair. She had a terrible mistrust of machinery. Perhaps, she died of fright expecting the planes to crash on her house.

The people of the Caribbean followed a religion that was a mixture of pagan concepts and Christianity. Symbols were common in their liturgy. This story which is narrated by the author as a nine year old has no significant metaphors. The grandmother’s fear of the lorry in which they travel and her death after the planes fly low seem related.

Though the author was born and bred in the US, her mother and her friends often spoke in a language that was filled with the native idiom of the islanders. Later in life Paule Marshall used this native idiom and slang in most of her writing. She explored the African heritage of the American Africans extensively and language was one of the areas that she concentrated on.

1. Perhaps she was both, both child and woman, dark and light, past and present, life and death – all opposites contained and reconciled in her.

The author’s first look at her grandmother makes her conscious of the power and control that exist in the old woman. Her face is like a mask and she subjects the author to close scrutiny. She is eighty years old and her body displays the effort it takes to keep herself straight. But she gives nothing away. Though her face was expressionless, her eyes were alive with curiosity. Within her, many opposing forces seem to have reconciled creating harmony of a kind.

2. Da-duh ashamed at their wonder, embarrassed for them, admonished them the while. ‘But oh Christ’, she said, ‘why you all got to get on like you never saw people from “Away” before? You would think New York is the only place to hear wunna. That is why I don’t like to go any place with you St. Andrews people, you know. You all ain’t been colonized.’

Once the initial scrutiny of the grandchildren is over, Da-duh leads her daughter and children out of the building. Outside a large gaggle of people are waiting beside an old decrepit lorry. Seeing the visitors from New York they surge forward, exclaiming in loud voices about their appearance and clothes. This irritates and embarrasses Da-duh who admonishes them for going overboard. She does not consider then ‘colonized’ enough implying that the colonial powers civilized the natives to some extent.

3. ‘I din’ think so. I bet you don’t even know that these canes here and the sugar you eat is one and the same thing. That they does throw the canes into some damn machine at the factory and squeeze out all the little life in them to make sugar for you all so in New York to eat. I bet you don’t know that.’
Da-duh took immense pride in her land and what grew there. She was derisive of the ignorance of city folk.

Da-duh expects her granddaughter to know nothing of trees considering that Da-duh believed that no trees grew in New York. She shows off the trees in her orchard, every now and then saying that she did not expect anything so nice to be there in New York. The child is made to feel that her world is in some way inferior. Da-duh’s pride and joy are the sugar canes. She sarcastically explains to the child that sugar comes from sugar cane, a fact she does not expect her to know.

4. I laughed. ‘What d’ya mean’, I said. The white people have it even better.’ Then: ‘I beat up a white girl in my class last term.’
Beating up white people!’ Her tone was incredulous.
Da-duh initially believes that New York is arid with no trees anywhere. It’s only when the child starts speaking about snow that she truly comprehends the difference between the two places. From then on the child tries to open her grandmother’s eyes to life in New York.

She tells her about the amenities that they use in US which have not arrived in Barbados. She is incredulous that the colored people living in US have access to all. The child tells her that the whites are even better off there. Da-duh’s ingrained belief in the superiority of the whites is shown when she almost cannot believe that the child beat up a white girl the previous term in school for being abusive.

5. She remained like this until we left, languishing away the mornings on the chair at the window gazing out at the land as if it were already doomed; the, at noon, taking the brief stroll with me through the ground during which she seldom spoke, and afterwards returning home to sleep till almost dusk sometimes.
The child’s description of New York unsettles Da-duh and she becomes listless; she who had been till now perfectly happy in Barbados. All her pride in her land disappears. It is almost as though she feels that her land is in some way inferior to the US.

6. For a brief period after I was grown I went to live alone, like one doing penance in a loft above a noisy factory in downtown New York and there painted seas of sugar cane and swirling Van Gogh suns and palm trees striding like brightly plumed Tutsi warriors across a tropical landscape, while the thunderous tread of the machines downstairs jarred the floor beneath the easel mocking my efforts.

The few days that the author spent with her grandmother made a profound impression on her. Da-duh had a profound mistrust of all machinery whether it was the lorry in which they all travelled from the port or the aircraft which came in a show of strength from England. When the author grew up, in a tribute to her grandmother, she spent some time in a loft that was located above a noisy factory.

Da-duh was critical about the way city people were not aware that sugar was manufactured from sugar cane. In the loft, the author painted scenes that she remembered from her Barbados visit. She painted violently colored tropical suns and spreading palms that looked like warriors from the Tutsi tribe in Africa, dressed in their war gear.