Analysis of ‘Beckett’, by Jean Anouilh 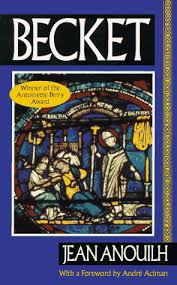 Jean Anouilh was born in France in 1910. After university, he drifted for a while doing odd jobs. He worked for some advertisement agencies and then wrote comic interludes for movies. It was in 1931 that Anouilh first tasted success as a dramatist. From then on, he wrote many plays though during Nazi occupation, many were censored. In the sixties, audience interest in his plays waned. Nevertheless, he is considered one of the leading playwrights of the twentieth century.

Many of Anouilh’s plays have a simple direct title; in the case of Beckett, the choice is justified as the priest and not the king is the protagonist of the play. We see him transform from the king’s friend who is beside him in all his escapades to the chief priest who dies protecting his honour. That there are unknown depths in the young man becomes obvious when he tells that he cannot serve two masters at once, God and king.

Beckett and Henry start off as best of friends. They hunt together, party together, pursue pretty girls together. Henry wants to make the friendship formal; so he makes Beckett his Chancellor. He values his advice regarding the church and problems related to it. Henry has many problems with the Church; he feels having his best friend as the Archbishop of Canterbury will solve all of them in stroke. This is where he goes wrong. Beckett has a vein of religiosity than runs deep. Beckett cannot serve God and king equally; he chooses God and makes an enemy of Henry.

Betrayal along with friendship is an important theme of the play, Beckett. There is betrayal of friendship in the killing of Beckett, Beckett betrays Gwendolen when he hands her over to Henry though she loved Beckett. When Beckett is Chancellor, he is not above betraying the Church. When Henry conspires with Folliot, he is betraying Beckett. Finally, though he promises Beckett safe passage to England, he angry rant against Beckett spurs the nobles to kill Beckett.

Beckett is a man on contrasts. In the play, he is a Saxon in the court of a Norman King. Nevertheless, he is Henry’s friend and trusted advisor. Beckett has feelings of inferiority as he belongs to the defeated race. With each promotion he gets, these feelings are assuaged. As a friend, as the king’s advisor, he is beyond reproach. But his treatment of Gwendolen shows the dishonor he is capable of. To Beckett’s credit, it must be pointed out that he does not wish to be the Archbishop of Canterbury as he knows there will be conflict of interest. But he accepts it as finally he finds the honor that has not been his. As the conflict with the king intensifies, he knows his life is danger. The king is a powerful enemy. But diligently he serves his God.

King Henry was constantly on edge, fighting the church for supremacy in England. He depended on his friend, Samuel Beckett. Beckett was a Saxon and he was a Norman but he did not let that come in the way of their friendship. Henry elevated Beckett to the position of the Chancellor as he wanted to formalize Beckett’s role in public affairs. It can be safely said that Henry did not behave as behooved a king when he asked for Gwendolen who was Beckett’s mistress. This is one of Henry’s first sins. When Henry sets out to make Beckett the Archbishop of Canterbury, Beckett entreats him not to do it as Beckett would find it impossible to serve two masters. Henry is foolishly arrogant to think he will take precedence over God. True enough, the friendship runs into rough waters. Beckett rebels, and is killed by Henry’s over-zealous nobles.

The play opens after the death of Beckett. Henry arrives at the Cathedral of Canterbury where he is to be flogged in punishment for his role in the killing of Beckett. As Henry waits, the ghost of Beckett arrives and speaks of earlier days when the two were good friends. Now the scene shifts to the days when Henry and Beckett were young men, spending their days hunting and partying. Beckkett is a Saxon, the conquered race while Henry is a ruling Norman. Nevertheless, Beckett is invaluable in the Privy Council. Henry wishes to formalize Beckett’s role in polity; forgetting that he is an Archdeacon of the church, he confers the title of Chancellor on him.

Once the king desires a young Saxon girl he meets when he and Beckett go hunting, Beckett realizes the girl is terrified so he tells Henry that he desires her himself. Henry relinquishes his claim on her but reminds him that he will expect Beckett to keep his part of the bargain. At night, Henry demands that Gwendolen who is Beckett’s mistress be brought to him. Beckett obliges though this is a terrible betrayal. Gwendolen cannot stand it and she kills herself in the presence of Henry. When the Archbishop of Canterbury, who is the most powerful church figure, dies Henry wants to proclaim Beckett the new Archbishop. Beckett wants no part of it. As an Archbishop, he must keep the interests of the church foremost, as Chancellor, his king and country.  This was cause conflict of interest so he appeals to his King to desist from naming him Chancellor. But the king is adamant and has his way.

Once named Archbishop a transformation comes over Beckett. He dons the humble robes of a monk and gives away his considerable wealth. He spends the day in prayer. Beckett demands that the killers of a priest be tried under ecclesiastical cannons and not the country’s laws. Henry considers this a challenge to his authority. He conspires with Gilbert Foliot who is Beckett’s rival in church. Beckett escapes to France and pleads to the French king for help. He also appeals to the Pope. Henry assures safe passage to England. Henry returns. But over enthusiastic noble who think that beckett is the king’s enemy, murder him while praying in the cathedral.

Henry was at logger heads with the church on the question of taxes that he had levied on it to finance the many wars he fought. The bishops felt that church was not in any way involved with Henry’s expansionist ventures.

Beckett is not emotional by nature. Gwendolen was his mistress but he handed her over to Henry as part of a deal.

Next Analysis: Balzac and the Little Chinese Seamstress – Dai Sijie

Analysis of 'A Different History', by Sujata Bhatt: The poetess Sujata Bhatt, while writing this poem has given importance to the culture and various religions in India. She has emphasized in her poem by repeating words and questions and thereby making her poem stronger. She writes about Indian traditions, lost

Author: Mary Renault Profile: Mary Renault was an English and South African writer. She was born in Forest Gate, Essex, England, UK and died in Cape Town, South Africa. She studied first at Levick family school and Clifton Girls School in Bristol and later at St. Hugh’s College, Oxford. At