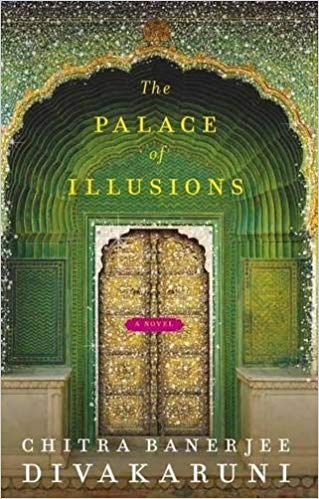 Palace of Illusions written by Chitra Banerjee Divakaruni  is an award winning novel which retells and explores the character of Draupadi from the Mahabharatha. Chitra Banerjee is an Indian American author and Poet. She is Professor of Writing at the Creative Writing Program in the University of Houston. Divakaruni’s works are mostly set in India and the US. Most of her stories are about South Asian immigrants. She writes for adults and children and has written in many genres like magical realism, realistic fiction and myth and fantasy. Her works have been published in 50 magazines and some of her works have been translated into 13 languages. The Palace of Illusions has some stories straight out of the epic Mahabharatha, some fictional additions but in total a magical expression.

Palace of Illusion is about Draupadi from her stand point. Her birth from the fire till her death is portrayed in this book. However it is not just Draupadi’s story alone. The stories of other strong ladies of the epic like Kunti and Gandhari is also included. The main storyline is of Draupadi. Draupadi is portrayed as a strong woman who can love with passion, is a woman of integrity and practicality and is a woman of courage. Draupadi is born out of fire with her twin brother Drishtadyumna. As she comes out a prophecy is heard that that she is a special girl and “Take good care of her, for she’ll change the course of history.” She also learns statecraft with her brother. Veda Vyasya comes one day and foretells she will wed five people and will be the person to precipitate the Great War.

As Draupadi grows up, King Drupad, her father calls for an archery contest to find a bridegroom for her. The PanchaPandavas attend it with the plan of sending Arjun for the contest. Karna who is also son of Kunti, mother of Pandavas, comes for the contest.Karna is born to Kunti before her marriage and so he is left in the river after his birth and is brought up by a charioteer. Draupadi loves Karna as she had heard many stories about his courage from her brother. However since Karna was from a family which was as good as the kingly clan he is not allowed to contest. Arjun wins the contest and takes his bride home. When they reach home Kunti asks Arjun to share his prize with all the other brothers. So Draupadi becomes the wife of five men and Veda Vyasya’s prophecy is proved right.

This incident is a classic example of how Divakaruni has deviated from the original story to give a new flavour to the story. In Palace of Illusions Draupadi loves Karna and they cannot marry and they unite after their death. In the epic story, there is no love angle between Karna and Draupadi. In fact it is Draupadi who says even if Karna wins the contest she will not marry him as he belongs to a lower caste. This in fact is one reason why Karna, who was a righteous person, did nothing to protect Draupadi when she was disrobed in the court. He did nothing to stop it. This deviation is a major one and there are others like this to make it a little different and interesting.

The story goes on that King Dhritharashtra had to give away half of their kingdom to his nephews, the Pandavas. The king’s sons, hundred in number and known as Kauravas were upset, especially the eldest son Duryodhana. The portion they receive is not a very promising land, yet they make the best out of it and name it Indraprastha. In the centre of it was the palace which had many illusions. One was a hall looked as if there is pool in the centre while another really had a pool. When Duryodhana visits this hall, he is apprehensive to step into the first one and is fooled. In the second one he walks thinking it is an illusion and he falls into the water. In the epic it is said that Draupadi laughed at Duryodhana but in Palace of Illusions it is said that her attendants laughed at him. This was also one reason that Draupadi was disrobed in the court as revenge.

Now Duryodhana wanted to take back the half kingdom and invites Yudhistra the eldest of the Pandava and king of Indraprashta to play a game of dice. Yudhistra agrees and he pledges one thing after another and loses each game. He does not quit with the hope of winning back all that was lost but that does not happen and he even he pledges his wife Draupadi. She is brought to the court and disrobed. The elders and the nobles in the court do not stop it fearing Duryodhana’s wrath. Finally her desperate call to Krishna saves her from being completely disrobed. There was a constant supply of material to cover Draupadi that Dushashana who was disrobing falls down tired. They are sent out for exile for 14 years. When they come back they are refused even a small area to build a house. So the war is declared and Krishna helps the Pandavas while his army joins the Kauravas.  The Pandavas win the war and rule for a few years and then hand over their kingdom to their sons and start their journey to death. One by one fall dead and in this story Karna and Draupadi unite in heaven.

So how is Draupadi the precipitator of the war? She vows after her insult that she would tie her hair with the blood drawn out of Duryodhana’s body. Bheema does it for her at the end of the war. The insult to Draupadi in the court is in many ways the reason for the big war. The Palace of Illusion explores the themes of revenge, pride along with portraying the strong woman, Draupadi.  Along with her friendship with Krishna makes interesting reading. The other women, Kunti and Gandhari are portrayed as powerful women. The Palace of Illusion is mythology combined with fantasy which makes it gripping reading.